Despite a few setbacks, I finished my draft of Valkyrie Bestiary book 6, now titled, Ghouls Don't Scamper. I also made my deadline (more or less) for my super secret project and I can confirm that it will be happening!

I've seen the cover mockups for both books. All I can say is, "Wow!" In the next weeks I will have more information, including cover reveals and pre-order details. But for now, I can give you these details:

Book 6 will be titled Ghouls Don't Scamper, and will be released some time in October. No, this will not be the last book in the series. I can't stress this enough. Every time I put out a new book, someone inevitably posts on social media that they are sad to see the series end. While that sentiment is nice, it is misleading to other readers. This is not the end! I have 3 more books planned, but book 6 wraps up the story arc that started in book 4 with the exploration of Kyra's backstory and her family.

And for the super secret project? I want to keep those details a surprise for a little while longer, but I can say that it is a holiday novella and will release in November. More in the next blog!

For now, here is a snippet from Book 6, Ghouls Don't Scamper. In this scene, Kyra has just learned that the godlings have escalated their demands to become a unique political party by blowing up the newly installed rail line. This would be bad enough, but Mason is stuck in New Manhattan Ward, and his only way home is the now destroyed railroad.

Finally, well after midnight, my widget buzzed. I grabbed it, hoping to see Mason’s face, but the screen was black. Only his voice came through, distant and tinny.

“I tried to call before, but the lines were down. Are you okay? Everyone is safe?”

“We’re fine.” Just hearing his voice filled me with relief, like being doused by a warm shower after a day out in the cold rain.

“You should stay out of the city for a few days,” he said. “There may be some backlash to all this. And I’m going to tell Berto to keep the Guardians close to home.”

“I already spoke to him. You don’t have to worry about us. Just get home soon.”

There was a long pause. “That’s the thing. I don’t know when I’ll be home now.”
I closed my eyes, trying to ward off the panic that was filling my lungs. I’d known this was coming. It would take a day or two to fix the railroad.

“I don’t know. It’s not just the road. They blew up a couple of generators. Those will take longer to fix.”

“A week at least.” There was a long silence on the other line. I could hear voices in the background, then Mason said, “I love you. I’ll be home as soon as I can.”

“Love you too,” I said, but he was already gone.

I stood by the patio door, with my forehead pressed against the cool glass. Outside, the wind had picked up, tossing red and yellow leaves around like confetti.

Most of the godlings had escaped Hub’s soldiers. They’d be fleeing through the Inbetween now. There were fifty kilometers between us and the rail station. Surely, they would never make it this far, but I was glad to spot one of the Guardians flying over the trees behind the house. They would patrol all night long, and tomorrow, I would reinforce the wards around the house. I could do no more tonight other than go to bed, stare at the ceiling and worry until I finally slept.

I woke to complete darkness and knew immediately something was very wrong. 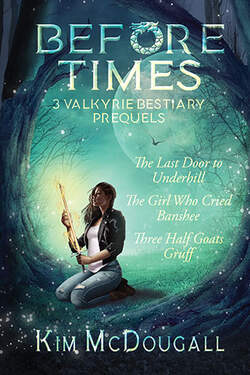 Once in a while, the Amazon gods let me put a book free for 5 days. This time, it's Before Times: 3 Valkyrie Bestiary Prequels. These stories are a great introduction to the Valkyire Bestiary series. If you have read VB, these three prequels will make you want to discover Kyra's world all over again.

The Last Door to Underhill: In the last hours of the Flood Wars, a fae princess makes the ultimate sacrifice to save the human world.

The Girl Who Cried Banshee: Kyra Greene is a pest controller, not an exterminator. She has to be clear about that when the pests can be anything from pixies to dragons. But when her fledgling business teeters on the brink of bankruptcy, Kyra takes on a job that blurs those lines.

Three Half Goats Gruff: Kyra Greene, pest controller of fantastic beasts, takes on a rock troll and meets the man who will haunt her dreams for the next three-hundred and twenty-one nights. Come sing around the campfire with satyrs and discover how Kyra found one little lost cephalopod.

Each story takes place 1 to 50 years before the events of Dragons Don’t Eat Meat, Book 1 of the Valkyrie Bestiary Series.

With over 2000 five-star reviews, readers say Valkyrie Bestiary is “Very funny,” “A sweeping adventure,” “A slow burn romance.” And more than one has said, “I want to be a supernatural pest controller too!”

CLICK HERE to get it free. July 25-29 only. And don't forget that it's always free on Kindle Unlimited. 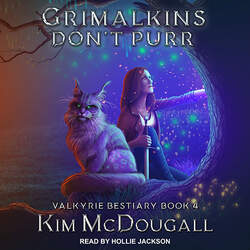 For audiophiles, Grimalkins Don't Purr (Valkyrie Bestiary Book 4) is now available for pre-order from your favorite audiobook outlet. It will be released August 9th. You can find pre-order info on the Valkyrie Bestiary Audiobook page.

Audiobooks.com has the Dragons Don't Eat Meat audiobook on sale for only $5 until August 1st. This includes the free prequel, Three Half Goats Gruff. If you've been wanting to dive into the audiobooks, now is the time! CLICK HERE for this deal.

And this month's book fairs are all about free books! The 5-day Free Book Fair is time sensitive. Be sure to nab these books before the deals expire on July 29th.

The Magical Short Reads are perfect for afternoons at the cottage or the beach, and all books are free! And the Mythical Creatures on Kindle Unlimited fair continues through August 8th.