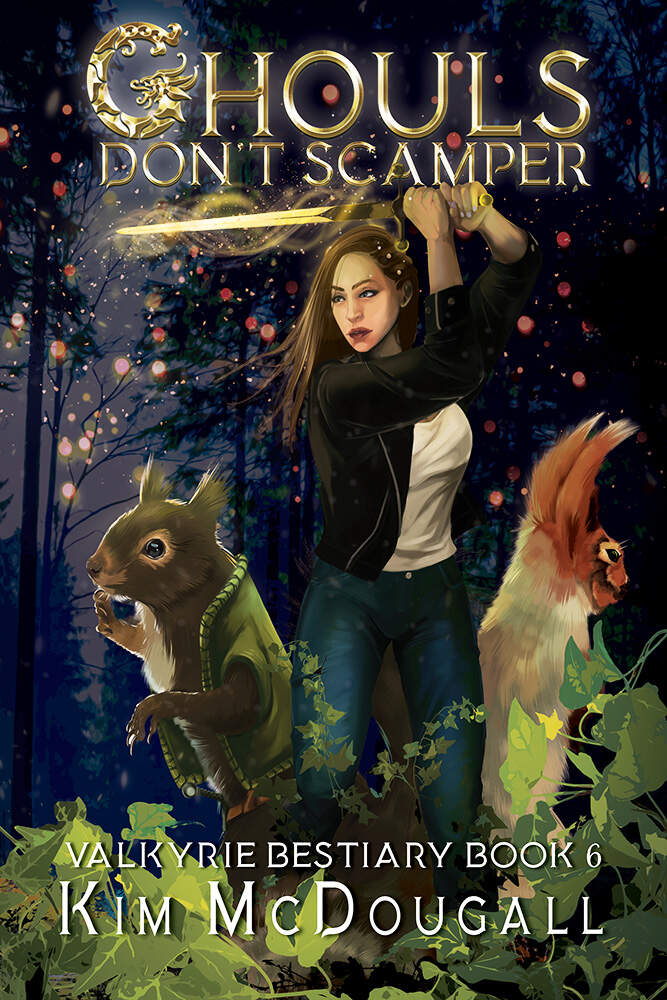 Critter wrangler rule #17: even the smallest creature can be big in magic.

Kyra Greene never thought she’d return to Asgard. Not after she burned the Rainbow Bridge, the only road home. Now she has no choice. With her unborn child’s life at stake, she must find a new route to the old world, or die trying.

Asgard will bring up ghosts of her past and Kyra will have to atone for her crimes, but none of that is as important as saving the life of her child—until a ghoul infestation threatens the very fabric of Asgard itself.

Can Kyra find the source of the ghouls before Asgard becomes the next Terra and falls into a war of magic and demons?

Ghouls Don’t Scamper is Book 6 of the Valkyrie Bestiary Series.

With over 2000 five-star reviews, readers say Valkyrie Bestiary is "very funny," "a sweeping adventure," "a slow-burn romance," and more than one reader has said, "I want to be a supernatural pest controller too!"

It was a perfect day, one of those warm October days that make you believe winter will never come. I sipped my allowance of coffee from my favorite snail mug. The current coffee shortages—due to a failed crop in Montreal’s protected greenhouses—made limiting my caffeine intake easy. I enjoyed it on the patio overlooking the barn and the vegetable garden. I’d been fussing over the garden all summer. Now it was yellow and brown and in no need of my attention. There was something satisfying in that.

Gleeful squeals floated up from the car park. The goblits, Tums and Tad, were teaching my new ward, Raven, how to play soccer. From the barn, where my many rescued critters were now comfortably housed, came the faint wail of a banshee. Gita was doing her morning chores. Far from being unsettling, the wail was as comforting as a lullaby.

Beside my table, our two feline roommates were napping on the warm paving stones, not exactly cuddled together, but not disdaining each other either. Willow was finally accepting the new cat in our lives, and Grim seemed to enjoy imitating a simple house cat for Willow’s sake.

I sipped my coffee. Such a perfect day.

My belly was full with a warm breakfast. My womb was full too. The baby was still no bigger than a kidney bean, but the magic of a new life tingled along my veins.

Mason stepped onto the patio and caught me patting my stomach.

“How’s Little Bean this morning?” He swept my hair aside to kiss my neck.

“Sounds exhausting.” He sat at the table and poured himself coffee from the carafe. Every Sunday, Dutch baked for the week, so we had fresh muffins and scones this morning. Mason would choose a cheese scone and slather it with strawberry jam like he did every Sunday.

“How’s the morning sickness?” he asked.

“Better. I think I might actually keep my breakfast down.”

“Good.” He reached for a scone, and I passed him the jam with a smile. He paused as he sliced the scone and grinned with one eyebrow quirked upward. “What’s so funny?”

“Not funny. Just happy. I like this.” I waved to the patio, the table, the house. “I like having breakfast with you and knowing that you’ll bypass the muffins and go right for the scones.”

“Hmmm.” He frowned over a mouthful of scone. “I don’t want to be predictable. Maybe I should change my diet.”

He pulled me onto his lap and roared as he pretended to bite my neck. It was so fast, I didn’t have time to squeal. One minute, I was sitting in my chair, the next I was wrapped in essence of Mason. His hands found my butt and gave it a good squeeze as he nipped and kissed his way down my throat. I was laughing too hard to protest. I squirmed on his lap and suddenly his kisses slowed and became more serious. I turned my head, meeting his lips with mine. And I opened to him.

Kissing Mason was like nothing I’d ever experienced. Every time. It didn’t matter that we were now comfortable enough to share a bathroom or that I knew exactly what he wanted for breakfast. The feel of his lips on mine was like coming home and being shot to the moon at the same time.

His tongue teased mine, hands let go of my hips to tangle in the loose hair around my shoulders. He cupped the back of my head, drawing me closer. My fingers fumbled with his freshly buttoned shirt…

A wheezing noise stopped us. It escalated to masterful gagging, then a retching cough. Mason and I side-eyed the night sun jaguar masquerading as a Maine Coon who was trying to bring up a hairball not ten paces away. The retching crescendoed to a truly glorious hacking upchuck. Grim’s ribs shuddered and he produced a trichobezoar the size of a golf ball. His green eyes gazed at us accusingly over his prize, then he flicked his tail and sauntered off.

Mason leaned his forehead against my chest. His shoulders shook with silent laughs.

“I think that’s the cat equivalent of ‘Get a room!’” I slid off his lap and found my own seat again.

“He’s probably right. The patio is no place for what I want to do to you.” Mason’s grin was decidedly wolfish and sent a little thrill zinging through me. Then he sighed. “But I have to get going, I suppose.”
It was Sunday, but that didn’t matter to the new Prime Minister of the Alchemist Party.

He’d been Prime Minister for three weeks already. I was glad to see he hadn’t lost his sense of humor among all the red tape.

His widget hummed. He glanced at it and frowned. “It’s Ramona. I have to take this.” He rose, already thumbing the screen. As he walked inside, I heard him say, “I’m on my way. What’s up?” He disappeared down the hall to our bedroom, cutting off the conversation.

Ramona Becker was his new Deputy Minister. It was a trivial title for a woman who’d been in politics for nearly fifty years, but Mason had chosen her for that experience. She knew everyone in the biz, and he relied on her to help him navigate his first months in office. She also had an uncanny ability to disturb our peace at the worst possible moments.

The childish shouts coming from the front yard shifted from playful to outraged. I listened for a moment, hoping the boys would sort out the problem themselves. I started counting to ten but made it only to six before the arguing spiraled to yelps of pain and fear.

I shot from my seat and ran to the front of the house. Tums lay on the ground with a split lip. He was a gangly goblin with large pointed ears that poked through his curly hair. His twin, Tad was furiously defending him against Raven who had his head bowed and was pawing the ground like a bull ready to charge. Princess lay in the dust with her nose on her paws. She whined and licked her lips. Her three favorite people were in trouble, and she didn’t know which one to protect.

“What’s going on?” I demanded.

Tums pointed at Raven. “He hit me!”

“He said my wings were stunted.” Raven’s eyes were black fire.

“They are!” Tums said and Tad nodded vigorously. Raven loomed over the smaller boys. When he’d first arrived, he wasn’t much bigger than the goblit twins, but in the weeks since, he’d sprouted at an unnatural rate. His thirteenth birthday was only few months away. He didn’t look like a teenager yet, but at least he didn’t have the physique of a six-year-old anymore. One white forelock stood out against the shaggy black hair that fell over his forehead and almost covered his glowering eyes.

I adopted my reasonable voice and turned to Tums and Tad. “Raven’s wings are just fine.” Tums scowled. I turned to Raven. “No matter what he said, that was no reason to hit him.” Raven scowled. Back to the twins. “Now don’t you two have lessons this morning?” The goblits nodded and slunk off.

Raven picked up the ball and stared forlornly after the boys.

I sighed. He was still withdrawn and cranky, and nothing I did changed that. I would be cranky too if I’d been pulled from the only world I’d ever known and forced to live with strangers. But still, I wished my attempts at trying to bond with him were more successful. Mason was better at reaching him. They spent hours together in the alchemy lab in our basement. When I asked Raven what they were working on, he only shrugged.

My hand strayed to Little Bean. I was so not ready to be a mother. So far my kid negotiations were like peace talks—no one ever got what they wanted.

Mason came out the front door, jacket on and widget still pressed to his ear. He disconnected the call and headed toward us.

“Salut, mon homme,” he said to Raven. “You and the twins playing ball?”

Raven’s lip curled in true adolescent disdain. He threw the ball into the bushes and ran into the house.

“Fight with the twins. We really need to make a decision about school. He’s bored more than anything.”
Mason frowned. “About that…” His tone told me I wasn’t going to like what came next. “You’re going to have to interview that second school on your own. My trip to Manhattan just got pushed up.”

Damn and damn. Mason’s first big diplomatic trip had been booked for the end of the month. I was still dithering about going with him. A trip to Manhattan Ward would be amazing, but Mason could use alone time with Kester Owens, our demon friend from Manhattan. He didn’t need me around while Kester mentored him on mastering his new dark magic. Still, a trip to Manhattan…But now the choice was taken from me. I couldn’t organize my schedule in time to leave tonight.

I didn’t like being left behind. Mason and I were a team. But I had to console myself that he’d be fighting with words and diplomacy in Manhattan. Swords and bug traps were more my thing.

“What happened?” I asked.

“The trade union is putting pressure on the Senate to get the trains running full time by the new year.” Until now, only soldiers and delegates like Mason used the one railroad that ran between Montreal and Manhattan.

He saw the look on my face and pulled me into his arms. “I’m sorry. I know it’s short notice. But I’ll only be gone a few days. When I get back, we’ll make a decision about school for Raven. I promise.” He leaned down and spoke to my belly in a stage whisper, “Take care of your mama, Little Bean.”

He kissed me, held me tight for so long I thought, and hoped, he might never let go. Then he got into his car and drove off.