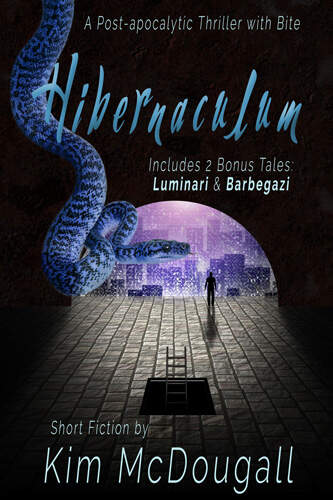 Hibernaculum: A post-apocalyptic thriller with bite.

Safari business is booming. Inside the Dome, people feast, create, laze. Most are content in the self-contained ecosystem. The builders of the Dome are long dead. Their great-great-grandchildren keep tellings of the Wild alive, but stories have rotted to mystery, then to legend. A few discontents walk the perimeter of the Dome gazing into the horizon. They know the wheat fields, forests and mountains are fake. They all know. The false vista is a comfort except to those who burn to know what truly lies beyond. Those find tiny holes, gaps in waste control and ventilation. Their defection endangers everyone and the Grand Duke vows to plug the holes with the bodies of deserters. Still the Wild calls.

Luminari: For the Vampire that has everything.

Devon is not one of the Chosen. He will not live forever in the arms of his undead lover, Rosalie. But he can give her the gift of sunshine. He will risk his life, his sanity and his blood for the Luminari. Will it be worth it?

Barbegazi: When the White Death calls, who will answer?

Etien changes the day he faces the White Death. His body is broken, but his spirit awakens. When his family's curse manifests inside him, he leaves his birthright for the ice-encrusted mountains where he both fears and hopes to meet the mythical icemen, the Barbegazi.

A halfling has been hiding in the snow outside the Barbegazi village for days. Ethgel can feel his fear, though the others choose to ignore him. But Ethgel is tired of traditions that seclude her people in the remote reaches of the mountains. She longs to reach out to the frightened halfling but will he embrace the ways of the Barbegazi or will his human failings, his unending rage and fear, come between them?

Flash fiction is cathartic for me. Sometimes, a story nags at me and demands to be written, but since I am focused on novel writing these days, I have little opportunity for other projects. Flash fiction sort of pops out of me unexpected, and it's a nice change of pace.

If you're unfamiliar with flash fiction, it is usually defined as a short story under 1000 words. Micro fiction can be really short, just a hundred words or less. Like Hemingway's famous 6-word short story: For sale: baby shoes, never worn. I mean, wow. There's a whole world of sorrowful story in those few words.