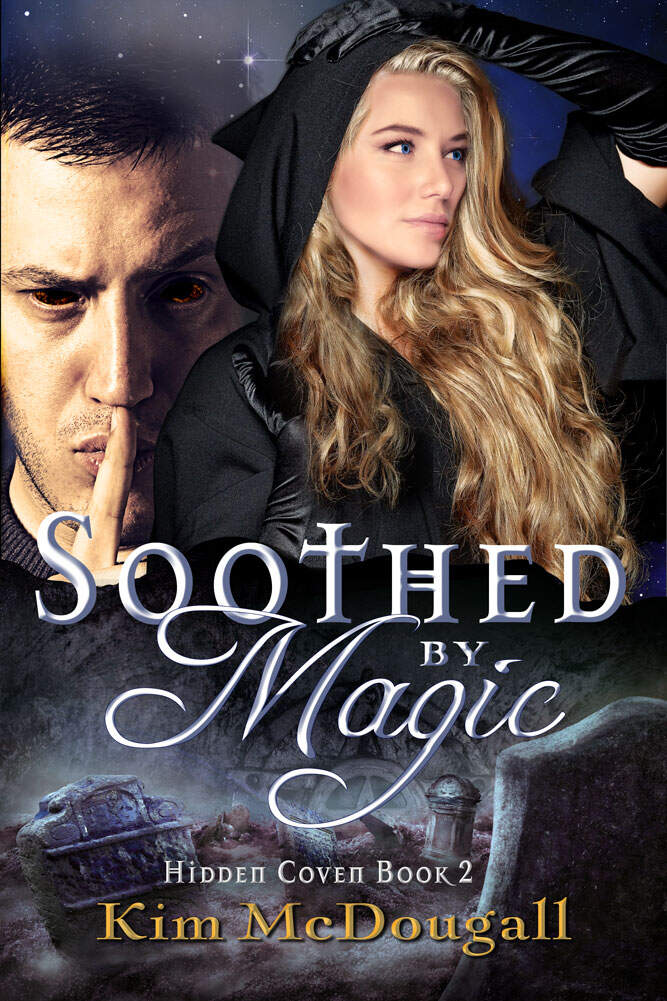 Goodreads reviews for Soothed by Magic

Something is wrong with Bobbi’s new boyfriend. Where did she find such a loser? Her new romance completely blindsided Quinn.

Is he jealous? Hell, yes.

And with the demon’s agent loose in Ashlet, he’s scared too.

Now he has to bring four powerful witches and two civilians together. Can he convince them that the threat is real, and not just to his love life? Or will Bobbi be forced into a deadly blood rite that will unleash a demon on the world?

Quinn will break all the rules to make sure the coven stays hidden, to make sure Bobbi is safe. Even if it’s in the arms of another man.

Mother nature forgot to switch on the autumn button.

I parked in the municipal lot three blocks from my shop. I didn’t mind the walk as the day was clear, and a warm wind blew off the

Anneke River. It matched the heat in my stomach as I thought of my date last night. New relationships are always good. That zing of electricity when your eyes meet his. The constant urge to touch, and the restraint that only heightens need.

“Mama, look! A witch!” I froze. With my mind wandering, I’d been absently playing with my keys, pushing one along the ring using kinetic magic. Crap! Abilene had warned me about practicing in public, but I tended to fidget with magic the way some people doodle while on the phone.

The little girl’s shriek made me drop the keys. I bent, hoping the child’s

mother was too preoccupied to pay attention. “She’s a pretty witch,” the mother said. “No!” giggled the child. “She’s ugly!” Well, that was uncalled for.

Mother and child walked past me, pointing at the decorations tied to lampposts. With Halloween only days away, the streets of Ashlet were fes- tooned with scarecrows, pumpkins and witches. Not real witches, but the cute pointy-hatted kind with green faces and warts. Those stereotypes should annoy me, but they didn’t. The world wasn’t ready for the reality of witches, magic and demons.

At Main Street, I turned right and spotted Gavin sitting on a bench in Bridge Park, a tiny green space that doubled as a town square.

I stopped. Seeing Gavin here was unexpected and it brought back a mixed bag of emotions I was still working through.

Gavin was the head of the vestals, a group of witches who dedicated their lives to keeping the Hidden Coven...well, hidden. Their efforts came at a great cost. The core—the engine fueling the protective spells around the coven—hungered for magic. Many vestals had died over the years when it overpowered them.

Last summer, the demon Koro used a confused teen to let a legion of wraiths loose inside the coven. They murdered every active vestal, leaving me and a few others to take up the reins and feed the core.

It nearly killed me, but I learned a lot about my aether, the life-force magic that pooled deep within me.

I hadn’t seen Gavin since I left the coven over a month ago. He leaned forward, elbows resting on his knees and a cup of coffee dangling in his hands. The sun lit his face, showing off tired lines. Behind him, the Anneke River rushed under the bridge connecting the two sides of town like a Band-Aid. Trendy shops on one side, decaying homes built by the original residents of Ashlet on the other.

“Hey, Bobbi.” Gavin looked up with troubled eyes. His smile was genuine, if sad.

“Hey, yourself.” I sat beside him. “Nice to see you around these parts.” I wanted to hug him or shake his hand. It’s what you did when you met someone who had lived through a crisis with you, someone you considered a friend. But he’d only shrug me off. Gavin didn’t like to be touched. So I sat awkwardly holding my purse in front of me like a shield and fidgeted with my keys. The wind swirled brown leaves around our feet.

Gavin gulped the rest of his coffee and tossed the cup into a waste bin. A large flower box sat beside the bench, filled with dead petunias that the town landscapers hadn’t yet cleared away. He touched the dried husks one after another, not saying anything for a long time. And there was a lot to say. We’d fought demons together. It left a mark.

When he did speak, it wasn’t what I expected.

“I’m mustering the courage to visit my mother. She’s at Riverview.”

Ah. Riverview Psychiatric Care Facility was an imposing building on the west end of town.

“I’m sorry. I didn’t know.” I shoved down the desire to pat his back.

“It’s not a big secret. She’s been there for years, since I was a toddler. That’s when Jane took me in.”

“We have something in common. I was raised by friends of my parents too.” I’d never understood what motivated Ellen and Emmett Kennedy to take in a lost, scared child. I only knew that Emmett and my birth father had been friends before the fire that killed my parents and my younger sister. It seemed Jane had the same selflessness, though she hid it well.

“I always feel like I need to stockpile sunshine before I see her. That place is...dark,” Gavin said.

Riverview hospital had been converted from an old manor house. It was only a few blocks from my shop and I often passed it on errands. From the out- side, it seemed charming, with a gabled roof and wrap-around porch. Inside? I really had no idea. But some days I heard screaming.

Gavin dug his fingers into the dirt of the flower box. Aether burst from him and the dead plants unfurled, turned green and bloomed.

Wow. Gavin was a flora mage. I had no idea.

“Enough gloomy talk.” He plucked a petunia and twirled it in his fingers. “What’s new with you? I haven’t seen you in weeks.”

“I’ve been busy.” I couldn’t help the guilty rush of blood to my cheeks. “You know how it goes with new relationships. The first weeks are pretty intense. I guess we’ve been cocooning.”

Gavin frowned. “I thought Quinn was away last week.”

“Quinn? No.” I laughed. “We had our moment, but it didn’t work out. This is someone new. His name is William.”

“Huh.” It was neither a question nor an opinion. He looked at me for a long minute.

“What about your magic training?” he asked.

“William is taking over. He’s super. I’ve learned more in the last week than I did all last month with Abilene.”

That tone was beginning to irk me.

“Does Jane know?” he asked.

“Jane is not the boss of me.” That came out too much like a whine. “I

mean, she won’t even let me know how to get to the coven.” Actually it was Quinn who insisted that I be kept ignorant of the coven’s exact location. When I left, he made me wear a blindfold and I still hadn’t forgiven him.

Thoughts of Quinn brought a brief unexpected pang to my chest, not exactly guilt. Remorse, maybe. But it was gone as quickly as it came.

“William says I should be progressing much faster.” That was true. Since meeting William, I realized my aether wings had been hobbled by the coven’s restrictive policies. William cut the cords for me. I held up my key chain with a grin and showed Gavin how I could pass the keys one by one with pure aether.

“Yeah, sure. I should go see my mother and get back to the coven. Some-

thing I need to check on.” He rose, and handed me the blooming petunia that had been a dry husk only moments ago.

“Next time you visit your mother...” I suddenly felt shy. I didn’t know Gavin well, but he seemed to need a friend. “I mean, if you’d like company. I’m always around.”

He smiled. “I might take you up on that.” He paused, considering. “This new friend of yours, does he have a last name?”

For some reason, I didn’t want to tell Gavin William’s last name. I fought through the unreasonable tangle of my tongue. “Fain. His name is William Fain.” The words hurt my chest as I spoke them and I had a wild urge to beg Gavin to forget them.