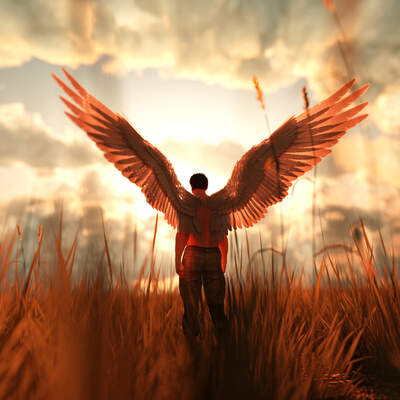 This story was in response to a writing prompt. Can you guess what the prompt was?

Early one morning, as dawn broke the blackness in two, I was three sheets to the wind and the sky was four shades of pink. Five minutes later, my sixth sense warned me of the angels who flew in from seventh heaven. Eight of them, not enough to fit on the head of a pin, were bound for the nine circles of hell.

“The ten commandments have been ignored,” said Zacheus, eleventh Malakim to God. “Twelve nights and thirteen days of darkness will be your punishment.”

He struck me fourteen times with his clawed hand and disappeared. Fifteen feathers floated to the ground in his wake. I took a sixteen-beat breath and counted my prayers--seventeen in all—before remembering where it all began.

I was eighteen the first time I knew with certainty that our dimension was nineteenth in an infinite number of realities. My ignorance killed twenty people that day, twenty-one if you counted the death of my own innocence. Twenty-two years later, I still could not shake the angels.

My case of Coors had twenty-three empty cans. I popped the top on the twenty-fourth, thinking that I would need more beer to get through the next twenty-five days. 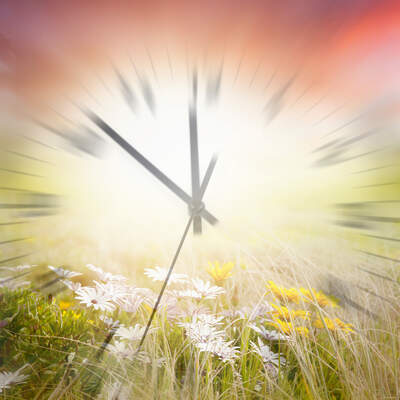 Love Out of Time

In this story I wanted to play with past, present and future. It was inspired by the book, The Time Traveler's Wife by Audrey Niffenegger. If you've never read it, I highly recommend it. It's like nothing you've ever read.

I seep, I jumped, will surge, have pummeled my way through that viscous membrane of time. It’s no barrier for love. I know you as a grayed, angelic crone. I laugh with you, plump in youth. You are hardened by loss, forgiving in motherhood, sentimental and prescient. All these breaths are only phases of the moon to you. They are my unending, ever beginning journey of us

I jump once more, arriving in your time naked and shivering. New lines curve around your familiar smile. Anchor me with your touch. Clamp your legs around my waist before I float away in the ether. I was home. Now I’m gone. 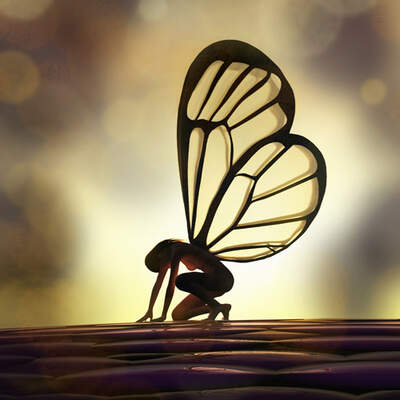 Turning the usual upside down and inside out, can often provide terrific ideas for stories. In this story, I played with the idea, "What if people thought you were crazy for not believing in the supernatural?

"There are no fairies, I tell you!" Mr. Doe pummeled his fists against the orderly's chest. His hands were cuffed, his wrists bruised and swollen from straining against the metal rings. Big Red grasped him by the forearms and contained his outburst. Several fairies twinkled about their heads, making soothing cluck-cluck sounds while Mr. Doe squirmed in Red's grip.

Skipper waited, swinging his enormous ring of keys in an aggressive arc. "Quit your hollering," he said and cuffed Mr. Doe between the shoulder blades with the flat of his hand. A troll had been washing the floor and Mr. Doe skidded on the wet tile. Big Red hung on, and the two tumbled together in a heap.

"It's all right," said Red, righting his stunned patient. The troll dabbed at Mr. Doe's split lip with a dirty rag. Mr. Doe jerked away, spitting blood. He tugged at his handcuffs again, but they were made of solid, dwarf steel and held fast.

"We should report you," Skipper berated the troll. "You could have killed him." The troll bowed and mewled and wrung his hands, but Big Red was already dragging Mr. Doe down the corridor to his new room.

A wraith hurried by with a clipboard clutched to its chest.

Big Red brushed one of the tiny creatures out of his face and sighed.

They paused at the door to a cell. The hospital had been hastily refurbished from an old college dormitory and the walls were still plastered with posters for sorority parties and self-help classes. Mr. Doe concentrated on these to block out the buzzing of the fairies. One of the posters, as cracked and faded as his own certainty, advertised a Halloween masquerade, sponsored by a vodka maker. For a few precious moments, Mr. Doe barricaded himself inside his memories of a gentler time—when folklore was a means of defining human history, not a way of life. A time when a man could offer a girl a vodka martini without checking for pointed ears.

"There are no fairies!" he cried again.

"Yes, Mr. Doe," said Big Red. "Of course not." It wasn't his job to rid patients of their delusions.

"If you don't believe," sneered Skipper, "then why did you run into the street screaming that the fairies were in your pants?" The police had stopped Mr. Doe as he ran shrieking through a downtown intersection, tearing at his clothes and hair.

"I was having a nightmare," said Mr. Doe. "Damn things were in my pajamas." Embarrassed, he looked down at his shoes. "But I'm okay now, really."

"Sure you are," said Skipper with a grin. He trapped a fairy as it fluttered by, and dangled it by the scruff of the neck in front of Mr. Doe.

"If there aren't any bloody fairies, then what the hell is this?" The tiny creature squirmed like fish on hook and made a soft keening sound. Mr. Doe's eyes widened and he looked away.

The cell was padded and empty but for a white jacket folded neatly on the floor.

And a small dragon that snoozed in the corner.

"Don't mind him," said Big Red with a reassuring smile. "He won't hurt you."

Skipper grinned and made a twirling motion with his finger to indicate what he thought of Mr. Doe's sanity.

"You've got to put this on for the night," Big Red said, holding up the straight jacket. "House rules."

Mr. Doe didn't fight when they slipped his arms into the long sleeves and tied them around his back. Several fairies buzzed around him, tucking in the material for a snug fit.

"There are no fairies," he said.

"Yes, Mr. Doe. Someone will come to see about your lip." Big Red frowned and shut the door with a finite click.

He was propped up helplessly against the wall facing the only window. As he watched the fading light from the barred window, a wee little man in a blue work shirt appeared. He waved at Mr. Doe and then began to wipe the outside glass with a rag.

He had pointed pixie ears.

Mr. Doe closed his eyes to shut away this vision, but he could still hear the gentle snore of the dragon and the fluttering fairies, like mosquitoes in his ear. 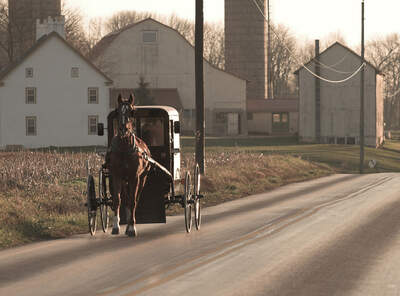 MY TRIP TO AMISH COUNTRY, PA

This one was originally published in Pen Pricks Microfiction in a response to their call for stories under 100 words.

We zoomed through Virginville, barely glancing at the quaint Victorian houses. Lunch time found us at Bird-in-Hand. We whetted our appetites, skirted Fertility and went straight for Intercourse and some vigorous shopping. Exhausted, we stopped in Smoketown for cappuccino lattes. On our way home, we drove back through Virginville. I didn’t know that was possible. 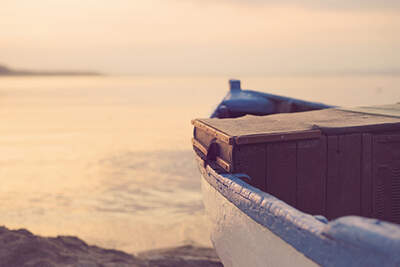 You get a beer for your brother because he asks. By rights, he should bring the beer. It’s your day. Graduation with honors. First college degree in your family ever. So you bring the beer to show him that you’re no different, that his life isn’t a mess. The midnight trips to the emergency room were only teenage angst. He’s over them now, the beer says.

You jump the precarious gap between boat and dock.

“Bring four,” says your brother. He’s lying on the bottom of the boat, with the dregs of your celebration—fishing tackle, picnic wrappers and empty bottles—pretending to stargaze. The night is not yet dark, the sun not altogether gone. It’s a perfect gloaming to mirror your buzz. The lake is obsidian glass cut only by the feathers of mated loons. They call to each other like lovers across a distance, the same sound you listened to as a child lying awake, worrying about your dad alone on the lake with nothing but a rod and a bottle.

You head towards shore and the fishing shack your grandfather built. The dock wafts and bobs with the beer in your stomach. You lean over the cooler to grab some bottles and the boards creak under your feet. You turn to face your father. He stands on the dock with his feet splayed for anchor. A cigarette hangs from his lip. Ice melts in his glass. He doesn’t offer to carry the bottles. Dad only drinks rye.

“Quite a day, wasn’t it,” he says. You nod and shift cold bottles in your arms. “I’m so proud of you. You know that right?” He sways as if a sudden wind tosses the dock. He throws an arm around your shoulder and you stagger under the weight of his affection. “You’re the only one in this family who matters, you know that, right? The only one who’s worth anything. Your brother…” He waves his hand. Watered rye sloshes over his knuckles. “I need to sit.”

You help him into an Adirondack chair, balancing bottles under one arm. He flings the burning nub of his cigarette into the bushes.

“I failed him. Such a failure…such a goddamned pathetic waste.” His voice fades to a wet whisper. “But you! You are the one. You will make heroes of us all!” He laughs until the cough kicks in. You listen to the phlegm rattle in his lungs. His hacking echoes around the lake and into the mountain silhouette, drowning the eerie laugh of the loons.

He lights another cigarette.

You wish he wouldn’t smoke or fling burning butts into the bushes. You wish your brother wasn’t lying in a boat a dozen feet away, waiting for the stars to shine.