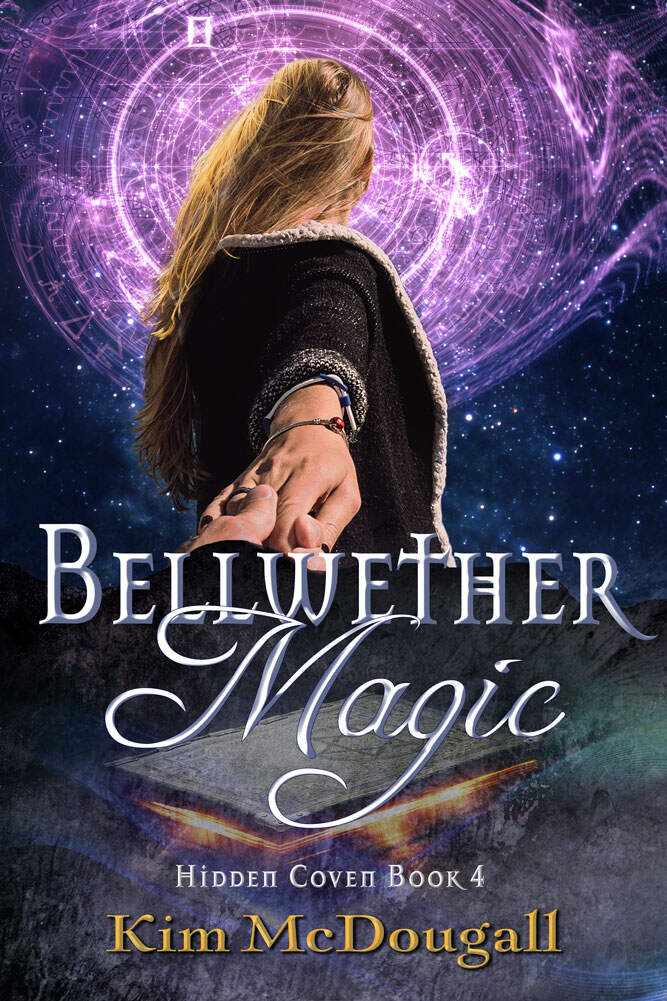 There’s a hole in the world. And it’s Bobbi’s fault. Now she’s trying to clean up her mess.

With a band of alien imps to round up, a booby-trapped grimoire to decipher, and the ever-looming menace of her demon father hanging over her head, Bobbi doesn’t sleep much these days.

Quinn’s world is unraveling too. As his body weakens from illness, he holds on tight—sometimes too tight—to the precious moments they have left together.

Those problems pale in the light of the divine Lady’s call to battle.

Now Bobbi must choose between her biggest threat and her greatest love.

Rosie wiggled her butt like a cat ready to pounce. She leaped from the creek’s edge and landed on the opposite bank—some twenty feet away—with a graceful flutter of stunted imp wings.

She turned with a shy smile.

“Your turn, most beatific one.”

I slogged through the icy knee-high water to the other side, grumbling about show-offs, and we headed up a muddy hill.

The air misted, not rain nor fog, but a clinging hybrid of the two that seeped into my clothes and dripped from my hair. It dampened sound and filled the space between trees with ghostly elegance, leaving ample cover for our prey.

I had no idea how Rosie tracked through this numbing weather. Up another muddy slope, past a giant wheel of roots from an upended tree, she followed a path I couldn’t see.

Rosie came through the dimensional rift that my blundering magic opened a few months back. Attracted to the scent of my demon blood, she followed me like a rescue puppy but, in truth, she rescued me. At least, she rescued me from a life without Quinn. Her healing magic brought him back from the brink of death after my father’s latest attempt to kill me.

Thoughts of Quinn tangled my emotions. There was desire—he was one good-looking male specimen—and a good dose of worry, since his illness had no cure. And love. I finally and freely admitted the depth of my feelings for him.

But today, Quinn mostly ticked me off.

Which was why I now slogged through the rain hunting imps instead of back in the relative warmth of my cottage at the coven.

We sparred this morning and not with swords or magic. With words, the most hurtful of all weapons. While he hadn’t actually said the rash of imps infesting the forest was my fault, any deaths or damage they caused were on my head. The Paragon knights rounded up most of the beasties and I decided it was my job to hunt down the last stragglers. Quinn didn’t agree.

And then he did the unthinkable. He tried to soothe me, to sway my emotions with magic so I wouldn’t leave. In the months since William Fain’s attack, I learned to protect myself against such magic, and Quinn’s was a half- hearted attempt at best. I saw right away he regretted it, but his petty trick fired my rage. More words were flung about. Accusations of weakness and mistrust. I yelled. He yelled. I yelled some more. He forbade me from going hunting alone.

It seemed like a good idea at the time. Now I wasn’t so sure. Rosie and I had scoured the forest for hours with no sightings of the last band of imps. We knew they hid out here somewhere because the Paragon sentries spotted them on their nightly rounds, but every time they tried to make contact, the imps fled.

“Are you sure you know where you’re going?” I asked. Rosie stopped and held one finger to her nose. Her fingers had extra knuckles and looked more like weathered twigs than appendages.

“I smell them, most divine super being. Blood. Death stink. Unwashedimpzadzl.” She sniffed the air and pointed up another muddy hill.

All I smelled was spring rot, but if Rosie said the imps were close, I believed her.

Weariness and rain dampened my anger, and I wanted to set things straight with Quinn. It was time to wrap up this little escapade. I’d put off using my magic as long as possible, but now I called it and surrounded myself in a warm cloud of aether. The chill instantly left my bones. Trudging over the mushy ground, my thoughts turned dark as the spell fouled my mood even more than the weather. Lately, using my magic brought this black taint like a fog of dissatisfaction that muddied my emotions. It was becoming harder to ignore.

In the two months since returning with my mother’s grimoire, I’d taken up residence in the Hidden Coven and begun magic training in earnest with the witches to guide me. Except there were no other magic users like me. No one in the coven could properly train me. My power came from demon blood. Simple spells exploded in my hands, while dark magics, like connecting to the coven’s hungry core, came with ease and left my mood dark and sour.

Maybe when I drank the aether of that berserker demon, it poisoned me. Or maybe my demon heritage caused it. Either way, I hoped the murkiness was a temporary side-effect, something I would overcome as I mastered my talents. For now, it only added to my dismal mood.
Rosie stopped at the fresh carcass of a pig-like animal. The imps weren’t the only creatures to come through the rift, but they were the most sentient. The imps hunted the other beasts for food. Perhaps they didn’t like the taste of our pigs and pheasants. That meant fewer beasts for our hunters to round up, but I was more concerned with finding the imps before they migrated into the general population.

The carcass was gutted, its soft internal organs gone along with the thick slabs of muscle. Bony legs, tusks and skull were left for scavengers. Rosie knelt and touched the rib bones still red with blood.

“Not long ago. They eat.” She nudged a pile of smaller bones beside the dead beast. They were gnawed clean. “They ate much. Slow like...zerbogs.” When I looked confused at the imp word, she made a vague gesture at the ground. “Squishy beast, big shell. Eat leaves and children.”

“Snails?” I didn’t know of any snail that could eat a child, but Rosie’s world was far different from ours.

I nodded. Rosie’s grasp of our language came mostly from serving humans captured by Koro. Possibly hundreds or thousands of captives, my mother among them. That thought darkened my already black mood and I shut it down.

I glanced at the sky, barely visible through the canopy. It was hard to tell in the mist, but it had to be late afternoon.

Rosie stuck one gnarled finger in her ear and scratched. The gesture made her seem child-like, except for the razor-sharp teeth protruding from her mouth even when it closed. She relaxed and listened. Her leathery wings opened and shut with the beat of aether flowing through her veins.

A loud snap broke the silence. Rosie spun, but I was already staring at an imp with a nocked arrow pointed at my chest. A dozen more emerged from the mist, pointing crudely made spears with fire-hardened tips. I dropped my warming spell and started spinning a ward.

“Move.” One imp prodded me with a spear. Since he stood only two-feet high, he hit the back of my knee. The jab startled me, and I lost the threads of my spell. Rosie snarled.

“They want food. They eat you, most holy one.” Rosie stepped between me and the larger imp with the bow. She snapped a few words at him in their mother tongue. The imp growled. Rosie lunged at the bow, but he jerked back. Two others tried to grab her.
A dozen spear tips held me still while Rosie thrashed and cursed in a mixture of English and imp tongue.
“Stupid...impzadzl...Get off!” Rosie’s tail lashed out. A shriek told me she hit her mark.

“Not holy,” Fenryn said. He was taller than Rosie but younger. The gold triangle tattooed to his forehead was brighter, his face less like worn leather, and his flattened nose had been broken more than once. Like the other male imps, he was tailless.

“Stupid.” Rosie’s tail swatted Fenryn on the back of his head. “No brains. Smell. She most supernal celestial holy beatific one. Even broke nose knows.”

The spears dipped as imps dropped to their knees, heads pressed into the wet earth.

Fenryn stood his ground though he let his bow drop. Either his mashed nose wasn’t sensitive enough to detect my demon heritage, or he didn’t care.