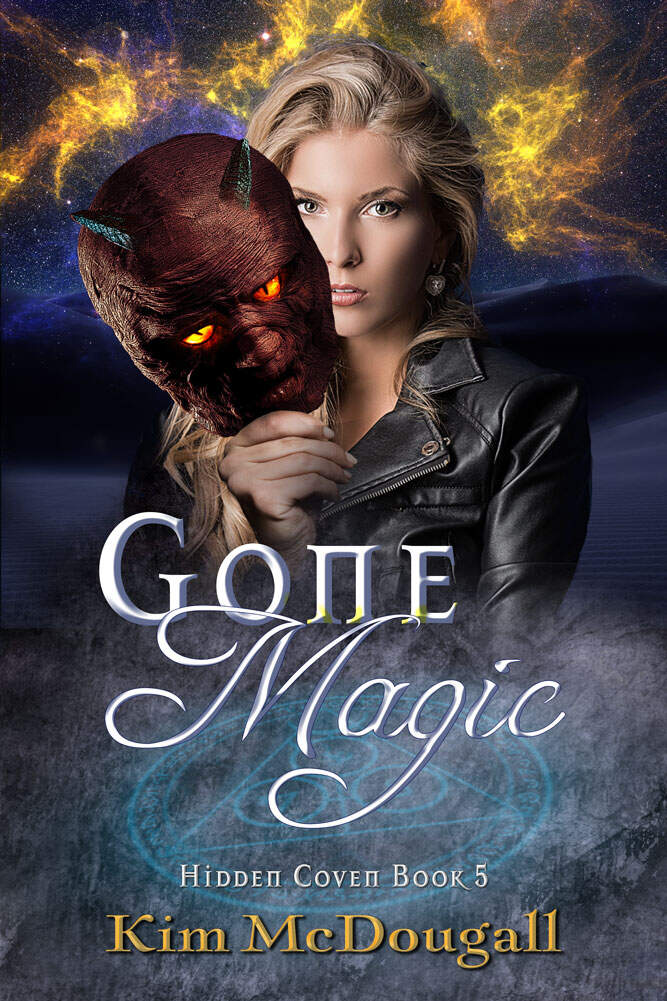 What waits beyond the rift? More demons? War? Maybe answers for Bobbi who still struggles with the dark magic growing inside her.

With friends and allies behind them—including the divine Lady and a group of mystical natives who can cross the veil between worlds—they race to the hellish epicenter where Bobbi's story began.

The grueling journey leaves Bobbi and Quinn little time to renew their strained bonds of love. Each will have to face bitter truths if they hope to have a future together—a future free from the perverse and all-seeing eye of Koro.

Is it a suicide mission? Probably.

How can a small band of witches stand up to a true demon in his own realm?

But they have to try. The fate of the coven and two worlds rests on their shoulders.

A zing of aether ran along my skin as I stepped through the rift.

I emerged onto a plateau overlooking a vast red desert. Two huge standing stones flanked the rift like guardians. Hot wind tossed sand against them and tugged at my hair and clothes. The air tasted of alien magic— spicy and exotic. I shivered despite the heat.

The light fell differently here. It was too yellow, like butter melting down the horizon. I looked back at my world, now just a doorway filled with green leaves and blue sky. The cool colors already made me nostalgic.

As the others stepped through the gate, we stood silent and uneasy. We were seven in all, our little band of...what? Soldiers? Vigilantes? Heroes, definitely. Whether we found our target and killed the demon Kororaeth or not, we were all heroes.

After Quinn came Jane. I didn’t want her along on this trip, but no one said no to the Mistress of the Hidden Coven. Next came the imps—Rosie, my self-appointed protector and Erita, our guide. Last to come through were two Paragon knights, Henry, my former magic trainer and Sybil, his chosen guard.

Standing on a rocky outcropping with the glowing gate at our backs, I hoped we looked impressive to whatever spies Koro had set to watch.

There had to be spies. The veil between our worlds thinned here, making it the ideal place for Koro to set his snare. I’d foolishly sprung it, opening the portal. He wouldn’t waste all that time and aether only to let us walk into his world unannounced.

I peered over the edge of the plateau. About a hundred paces away, a piece of white fabric flapped in the wind. It was a tent, broken and half-buried in the sand. Now that I recognized it, other bits of the abandoned camp became obvious. The wheel of a cart rested against a rock. Pots, tools and bits of armor lay discarded and partially buried in the flowing sand. Someone, many some- ones, had been here recently, but for now, we were alone.
“That was too easy,” I said. “There should be more...I don’t know. More something.”

“I expected something. Or someone.”

“Be glad we have no welcoming party.” Quinn also scanned the horizon with a grim expression. “Looks like the imps camped here before coming through the rift.”

“But why would they abandon it?” I asked. “It makes no sense, if they were sent here to guard it.”

The wind scuffed across the rock plateau. Intermittent puffs of sand billowed up from the dunes like dervishes.

Henry and Sybil circled our base of stone, guns pointing into the rolling dunes.

We waited.
All was silent but for the restless sand.
“Where are they?” Quinn didn’t whisper exactly, but his voice slipped into

the desert. The constantly shifting sand could easily mask an army.
“We need to move out,” Henry said after several tense minutes.
Erita pointed into the desert and mumbled in the imp tongue.
“This way, most blessed one.” Rosie tugged my hand. I had no idea how

Erita could tell the right direction in this featureless place, but she moved off with purpose and I followed. Quinn stopped to help his mother down the first steep dune. I turned to the side and slid. Sand filled my boots.

We stepped over the remains of the camp, including several skeletons gleaming in the sunlight. One was humanoid.

“Step where I step,” Erita said. “Sand has teeth.”
I nodded, not wanting to know if she meant literal teeth.
We walked in a single file with Erita and Rosie in the lead. The ground

shifted randomly under my feet, and I fell on my knees more than once. We climbed up dunes and slid down the other sides. Sand-laced wind slashed at exposed skin, and we bundled up in scarves. The heat sucked every bit of moisture from my skin.
Henry stepped aside to look behind us and sank to his knees in quicksand. Dropping his pack, he braced himself with his rifle’s butt. The sand pulled him deeper. Within seconds he sank to his waist.

“Take my hand!” With my feet planted at the edge of the quicksand, I reached for him. Quinn grabbed me around the waist and we hauled Henry back to solid ground. He emptied sand from his boots and pockets, his rapid breathing the only indication of the near-death encounter.

Erita pushed through us to stand over him. She was small, even for an imp, with one milky eye. Her stubby tail quivered like an arrow. She glared at Henry with her one good eye and spoke in gruffly accented English.

“I say step where I step.”
Henry nodded. “Yes, ma’am.”
We all took a moment to drink from our canteens. We were an hour into

the journey that would bring me face to face with my demon father, and I already felt lost.

The landscape didn’t change. Quinn saw no sign of Koro or his minions. Occasionally, small creatures darted across the sand, too fast for him to see more than snake-like shadows. He took a cue from the imps who ignored them. Sybil, Henry’s choice of Paragon muscle, was twitchy with her gun. Every time the sand stirred, she swung her rifle to meet the danger.

“You’re going to wear yourself out,” Quinn said. “We’ve got a long road ahead of us. You might want to tone down the paranoia.”

Sybil glared at him but didn’t loosen the hold on her gun. Quinn fought the urge to reprimand her. As the coven’s chief of security, he expected blind obedience, but Sybil’s first loyalty was to Paragon not the coven. He’d keep an eye on her before her trigger-happy finger got them into trouble.

“I knew she’d slow us down,” Bobbi said as they rationed water from a canteen.

“She’s not stopping for herself.” Quinn kept his voice low. “She thinks I’m fragile.”

“Are you?” She watched him with a steady gaze. The wind pulled at a loose lock of hair and whipped it about her face.

Lord and Lady but he loved this woman.
He pulled her to him and whispered in her ear. “You fixed me up good. We’ve got this.”

They stole two precious minutes of contact, but her frame never relaxed. “You okay?” he asked.

She shook her head and smiled dryly.

“I love that sound. Your beating heart.”

Not long ago, his heart had nearly stopped as the mawr attacked his aether and drained his life. Bobbi cured him. No one else had the sheer power to do it. She didn’t see it that way, of course. Bobbi only thought of how her cure almost finished him off. But he knew the truth. She was the strongest witch he knew. And though she worried her magic was tainted with darkness, he could see the pure light shining from her eyes every time she looked at him.

He pushed her scarf aside and kissed her.

No matter what the next few hours or days brought, he’d rather face them with Bobbi than spend his days without her.
Erita fidgeted with impatience, ready to move on. They walked through the draining heat. The landscape never changed. Once, a line of elephantine beasts appeared on the horizon. They took no notice of the humans, and they trudged on.

“How long are the days in this place?” Quinn asked Rosie. He desperately wanted the red sun to set and give them a reprieve from the heat. The imp shrugged.

“As long as needed.”

Rosie’s English had improved by leaps and bounds. She was being deliber- ately obtuse.

On the next rise, Erita stopped and pointed.

Another henge of stones jutted from the desert, barely silhouetted against the dying light.

“We go there. Stop for...” Her last word was unrecognizable. She looked at Rosie for translation.

“We stop for storm,” she said.

“What storm?” Henry asked. “The sky is perfectly clear.” He was right.

The wind died hours ago. Quinn looked up at unfamiliar stars just starting to fleck the sky. Erita didn’t answer.
Distances were deceiving in the desert. Just because they could see the henge on the horizon didn’t mean it was close. They walked on as the sky darkened and the wind picked up. Soon the blowing sand was thick enough to choke on, and Quinn lost sight of the standing stones. Henry pulled a rope from his pack and linked them in a chain. Erita danced from foot to foot while he secured them.

“We run,” she said. They stumbled and slid over the ever-changing land- scape. Quinn tightened the scarf across his face, but the sand found its way inside, chaffing and choking.

“We won’t make it!” he yelled over the roar of the wind.
“We must!” Rosie yelled back. “Sand devours all!”
Quinn ran. Ahead, he could barely make out Jane and Bobbi stumbling down yet another shifting mountain. The blowing sand swirled like a curtain. He pressed on. One step. One slide on loose ground. Another step. Always forward. Always battling the biting wind.

When the henge finally reared up in front of him, Quinn could barely breathe. He staggered into the circle of stones to find Jane seated in a lotus position, eyes closed as if in meditation.

She opened her eyes and said, “Is everyone inside the stones?”

Jane clapped her hands once. The sound echoed like thunder and a ward sprang up around the stones.
Inside their little tent of magic the wind died. Outside, it blew with monstrous force. Within minutes, a drift of sand piled against the invisible ward. “We’d better get some sleep,” Henry said. “We’ll have to dig our way out tomorrow.”