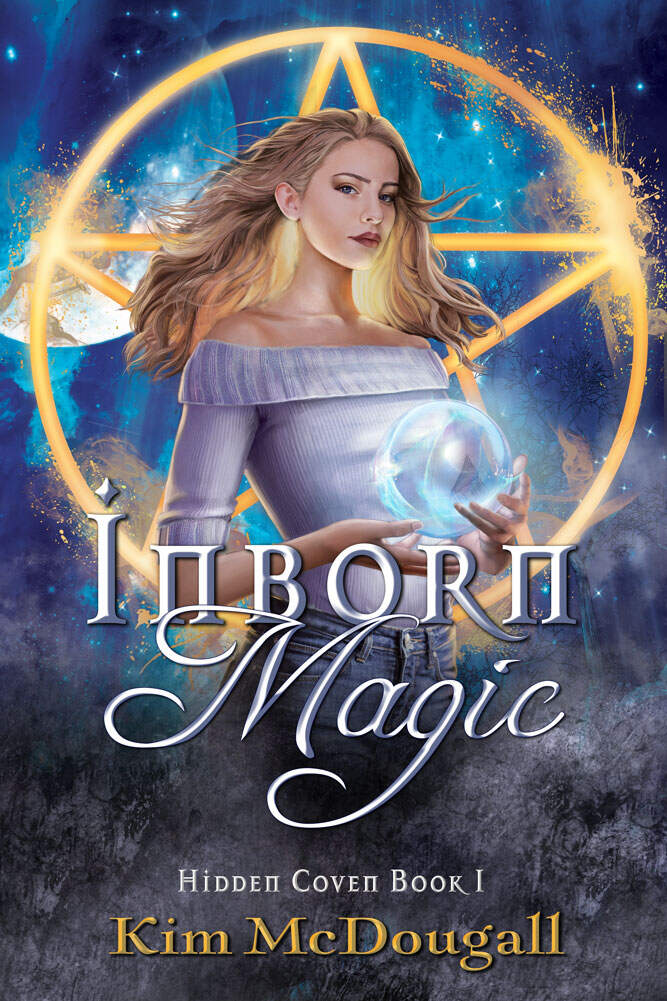 Shop eBook
Read it FREE at these retailers:

It should have been a simple spell. Light into heat, heat into flame. How did it all go so wrong?

Only the Mistress of the Hidden Coven can save her, but Quinn doesn’t want to let a stranger past the coven wards. It’s his job to keep strangers out. Especially when a demon is hell-bent on stealing their most precious resource—magic.

Can Quinn lower his shields enough to let Bobbi in?

Can Bobbi trust these witches to help her tame the wild magic inside her?

My will into fire. It was a simple spell. What could go wrong? I tilted my head, studying the three spell ingredients on the grass—an amethyst, a posy of fresh buttercups catching the last rays of

sunlight, and a candle in a glass votive—all sitting with me inside a ring of salt. I had no idea if that was right. This was a seat-of-the-pants adventure.

A proper witch left her hair long and loose for rituals. Mine hung like adamp towel around my neck. The grimoire suggested spells were best done sky-clad, but public nudity made me self-conscious. Even in my secluded backyard, I wore a long t-shirt and panties.

I peeled the shirt from my damp skin and rearranged the ingredients again, laying the flowers across the amethyst. Buttercups were a visual aid to represent heat and light. The crystal would bend my sympathetic magic to ignite the candle and POOF! I’d have fire.

Light into heat, heat into flame.

I frowned at the wilted flowers. Did withered buttercups retain their affinity with the sun? Would a carnelian stone be better than the amethyst for fire magic? Maybe. I dithered and I knew it.

This was the problem with independent learning. I had no one to ask about the finer details of spell weaving. The only decent instruction book I’d found was Miss Abernathy’s Grimoire, an ancient, hand-written tome of dubious origin. Miss Abernathy said to “use a crystal attuned to your spirit and the cycle of seasons.” What the hell did that mean? How could I tell if a stone was attuned to me, let alone the season?

I sighed. The afternoon wore on toward dusk. The amethyst would have to do. At least it had grounding properties. If nothing else, I could use some grounding. This whole process left me jumpy.
Carefully, I poured more salt on the circle around me to keep out bad spirits. Better not to chance it. Not that I expected demons to be interested in my lowly attempt at magic, but Miss Abernathy’s first rule of conjuring was “try your best and prepare for the worst,” one of her frequent and slightly patronizing platitudes.

The ground was warm and damp under me with the loamy smell of recent rain. I crossed my legs and stretched the kinks from my neck before closing my eyes and trying to relax. Turning my mind inward, I pushed away hundreds of fledgling thoughts vying for my attention. My connection to the ground evaporated as I tuned out the itch of grass on calves and thighs. Waves of light and shadow swirled across the canvas of my closed eyelids, splitting and melding like breakers on a beach.

This has to work.

The number of near-disasters and odd coincidences in my life came to a head last month. I could still feel the strain of my clenched fists while Charles, my cheating ex-boyfriend, choked and clawed at his throat. I hadn’t touched him, but his eyes bulged, and his face turned red before realization made me stop. I had done that to him.

That fiasco spurred me to finally take up the reins of my education into the dark arts.

I shoved Charles aside and focused on the sensation of my body parts dropping away one by one. My toes disappeared first, then my calves. A light breeze prickled my sweaty skin, breaking my concentration.

Deep breath in. I began again.

My mind floated in a whorl of light and dark, free but anchored to the secret well inside me—a space between my heart and my womb where I imag- ined all my memories, hopes and dreams were stored. I dipped into that well, drawing on the power I found there.

I opened my eyes. The last rays of sun glinted off the crystal.

“Ignis.” My voice rang like a church bell heard two counties away. The blood-red amethyst glowed. The rest of the world blurred and darkened as I looked down a long tunnel at the stone and posy.

Light into heat, heat into flame. Power of the sun into fire!

Something inside me broke, like the membrane around a yolk, spilling power through my veins.

The amethyst gleamed. The flowers blackened and smoked.

Light into heat, heat into flame!

The candle wick sparked. A giddy surge of power washed over me. It was amazing. Exhilarating! Every fiber of my body tingled with a brilliant intox- ication. I held up fingers that glowed from within. I was the fading twilight, even as I bathed in the twilight. I was the power. Magic rushed through me, flooding my veins, bolstering me until I felt like a leaf tossed on the wind. I laughed with pure joy.
Then the wind became a tornado.

Magic turned livid. Light flared with a white-hot screech. Pain shot through me. The candle shattered in an explosion of wax and glass, slashing me with dozens of tiny blades. But the pain went much deeper. This new force bit my soul, tore a piece of me away, and shredded my power.

I tried to scream but heard only a desperate gurgle from my throat. I couldn’t move. The magic I’d unleashed thrummed, drowning out all sound and thought.

I tried to unlatch the razor-sharp tendrils biting into me, binding me to the magic. But they clung to my secret well. I’d laid open my sacred space, and it was now violated by power I couldn’t control. I was caught, held tight in an invisible iron grip.

And it sucked my magic dry.

Frozen, I teetered back and hit the ground.