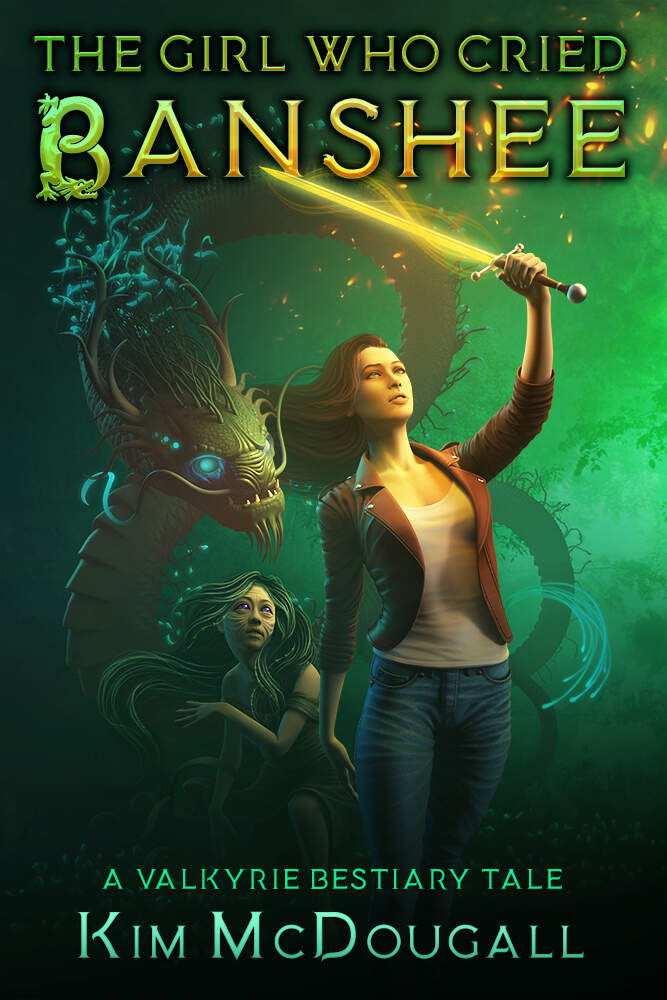 Available in paperback as part of the anthology "Before Times"

Goodreads reviews for The Girl Who Cried Banshee

The Girl Who Cried Banshee

Kyra Greene is a pest controller, not an exterminator. She has to be clear about that when the pests can be anything from pixies to dragons. But when her fledgling business teeters on the brink of bankruptcy, Kyra takes on a job that blurs those lines.

Now she's deep in the lawless Inbetween, trying to clear a mysterious infestation from a fishing village. But these homesteaders won’t make it easy for her. Superstitious natures are easily provoked. And a banshee living in the hills above the village makes a good scapegoat.

Can Kyra find the source of the infestation before the homesteaders force her to make a life or death decision?

The Girl Who Cried Banshee is a Valkyrie Bestiary prequel novella and takes place 10 years before Dragons Don’t Eat Meat.

Two steps into Abbott’s Agora open air market, the scent of roasted meat and garlic siren-called to me. Color sprouted from hand-dyed fabrics. Fruit and vegetables laid on trestle tables smelled so vivid, I could taste them. The air buzzed with a dozen languages. And the magic suffusing everything? Well, that was neither smell nor sight, taste nor sound but a bastard blend of all these. A blend only someone with the keening power could sense.

Someone like me, Kyra Greene—exiled Valkyrie, failing entrepreneur, sucker for a furry face.

In my younger days, the Agora’s magic would have overloaded my keening. A seizure wouldn’t have been out of the question. But since returning to Montreal—with all the post-war magic flying around like explosive shrapnel—I’d learned to ward myself against such an awful alchemic assault. I took a moment to reinforce that ward now, one psychic block at a time.

Learning to ward myself was the only magic my mother had given me—that and the three-foot long Valkyrie sword strapped to my back. But neither swords nor wards could defeat the lure of roasted souvlaki. And a few minutes later I found myself standing in front of the meat merchant’s shack, drooling over a slowly turning lamb shank like a vampire at a blood drive.

“You buying?” The cook’s pale aura fizzled. When I didn’t answer, he held up one beautiful, blackened skewer of meat.

I wanted that meat.

I pulled out my widget and scrolled to my bank account.

Not even enough to cover my looming mortgage payment, and I still had to buy feed for my abaia eel and an injured ice sprite. Souvlaki was a luxury I couldn’t afford. But hunger prowled in my gut, sharpened its claws on my resolve, and I tapped my widget to the merchant’s, making the payment.

“Thanks.” I wandered along the cobblestone path, nibbling my meat hoard. Maybe if I took longer to eat it, my stomach would think it was a full meal.
If my pest control business made money, I could buy plenty of food. But so far, that hadn’t panned out. Maybe my Sayntanne neighborhood was too far outside the city. Maybe I needed to advertise more. Maybe I’d overestimated the rampancy of fae infestations.

To cut costs, I needed to harden my resolve and find homes for some of my rescues. Which was the mission behind today’s trip.

I finished my treat and tossed the skewer in a recycler. Shouts came from ahead, and two Viking-wannabes pitched out of a beer garden, punching and cursing. A bottle of beer smashed on the cobblestones, filling the air with the smell of hops. Their scuffling knocked me off my feet, and I landed hard, scraping my palms on the stones.

My sword, sensing a battle, squeed in its sheath.

The men—one red-headed and one dark—struggled to put each other in headlocks. They weren’t really fighting. I’d known enough true Vikings to recognize a brotherly brawl, but they punched hard enough to rattle bones. Red flipped the other one, pinning his legs and arms like tying a hog, and accidentally pinning my leg too. I squirmed to free it and he glanced up, teeth bared in a feral grin. Our gazes locked. His eyes were Icelandic blue, his beard robin-breast red and…

…and suddenly I was transported back to my grandfather’s hall in Asgard. My Aesir cousins were brawling over spilled mead. Aunt Dana watched with a pained but patient frown. And Aaric was kissing and tickling and teasing me—always teasing me.

I closed my eyes and opened them again, forcing my brain to see what was in front of me. By the One-eyed Father, they were just a couple of guys. Human guys. I had to stop seeing Aaric in every face in the crowd.

Aaric was dead. Dead by my hand and no combination of wish-regret-denial would change that.