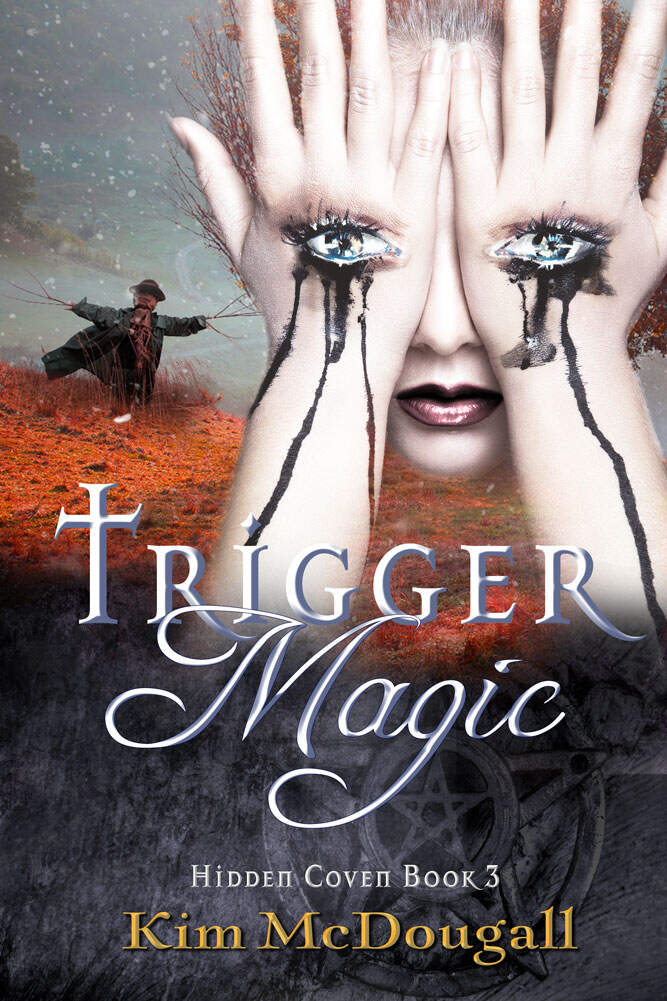 Quinn is cursed. Bobbi’s a magical screw-up. Together they make a great pair.

Barely over the trauma of her father’s last attack that left her broken in body and spirit, Bobbi sees demons hiding in every shadow. But some shadows hold real threats.
Someone broke into her house and her shop. Is this new stalker one of Koro’s agents?

With no one else to turn to, she seeks an alliance with the Hidden Coven. But the witches don’t trust her. Why should they? Her ignorance nearly let a demon into their world.

Quinn’s polite manners tell her that he wants to keep his distance too, and his cold shoulder hurts more than anything.

Bobbi’s fate now lies in the hands of the Goddess, the coven, and a man whose heart she already broke twice. She’ll have to learn to master her unruly magic—and fast—if she and the coven are to survive.

The sky broke. Fat heavy raindrops pelted the roof of my car. Tired of spring, Mother Nature just wanted the job done. I turned off the engine and sat in my driveway.

Lightning reflected off the dark windows of my single-story house. The rain increased, and was that hail? Yep. Ice pellets pinged off my car as if daring me to break for the house. I closed my eyes and leaned against the headrest.

I’d been awake since before dawn helping my father at his Open Gate Farm Tour fundraiser. Now close to midnight, I needed sleep. Emmett wanted me to stay at the farm, but I had to work tomorrow. I wanted my bed for tonight and my bathroom and closet in the morning.

The hail stopped, giving me a small reprieve. I readied myself to dash for the door, wishing I knew a spell against weather.

Wind nearly ripped the door from my grip as I jumped from the car. Hail- stones crunched under my feet. Cold water dripped into my eyes and plastered my clothes to me by the time I reached the door.

Lightning crackled again. I froze. Something was wrong. I wasn’t proficient enough with wards to protect my entire house, but I’d set up a few magical trip wires around the perimeter. I should have felt a tingle of aether as I passed over them, but I didn’t.

The wards were gone. I unlocked the door and flicked on the light switch. Nothing. Just perfect. The storm knocked out the power. Or had it? I peered back

into the rain. Several porch lights glowed up and down both sides of the street. As a sensate, I could detect the presence of aether, a less useful talent than it sounded. All living beings gave off aether or life-magic and continually scanning for it was overwhelming. But in the aftermath of events from last fall, I’d practiced discerning useful information from all that noise.

My house felt off. Mentally, I picked through the familiar aether signatures. I’d started to think of these in connection to my other senses. The houseplants gave off their peculiar earth-scented aether. A faint orange tinge remained on the couch where the neighborhood cat slept on cold nights. And something else. A jittery aether, like the sound of cicadas buzzing in the summer heat. This aether was too fresh. The intruder still hid in the house.

A blast of cold air told me a window was open somewhere. With quiet steps, I headed into the kitchen. The storm raged overhead as lightning and thunder collided. Each flash ignited the room, then left me blind.

“Hello? Who’s here?” My voice rang too loud in the dark. I passed through the kitchen into the dining room. Rain blew in through the broken patio door, and shards of glass littered the floor. Lightning briefly illuminated my backyard, empty except for the patio furniture neatly piled under a tarp for the winter.

Turning back to the quiet house, I called up my aether ward, struggling to make the protective spell big enough to surround me. It wouldn’t deflect bullets, but like Kevlar, it would slow them down enough to keep me alive. And it would protect me from all but the strongest magic attacks.

Thunder clapped and lightning burst through the windows. I dropped the phone and heard the operator’s tinny voice from where it lay on the counter.

“Ma’am? Please get out of the house, if you can. Ma’am, are you still there? Bobbi?”

A crash came from my bedroom.

I slipped a knife from the rack, and wrapping my ward around me like a cloak, stepped toward the back of the house. Something loomed at the end of the hall. Lightning flashed, and I recognized the hanging stairs that led to my attic.

“The police are on the way!” I called into the gloom.

A ball of light struck me in the chest and exploded. Crackling energy raced across my skin, pain and heat in its wake. The ward took most of the hit, but the blast knocked me backward. I fell, dropping the knife and ward. My eyes burned with hot tears as the intruder rushed past me. I kicked out, trying to

trip him. My foot glanced off his ankle. Another bolt of white-hot light ripped into the wall beside my head. I flattened myself to the floor.

He flung open the front door, and it slammed against the inside wall. Rain blew into the foyer. Lightning cracked, and behind the pealing thunder, I heard the wail of sirens.

When the police arrived, I sat slumped in a daze beside the scorched drywall, the paint around it black and peeling. I touched my sore chest where the other bolt hit me. What damage would it have done if I hadn’t been shielded?

Five months ago, my demon father possessed a creep named William Fain and pushed him to use me in a dark rite that I didn’t completely understand. If he’d succeeded, Koro would have birthed himself into our world, tearing me apart in the process. And no one—witch or mundane—would have been safe from his lust for aether.

William taught me a healthy fear of soother magic. To this day, while I lay in that paralyzing moment between wakefulness and sleep each night, I could feel his slithering magic enfolding me, taking away my will, and I’d shoot upright with a scream lodged in my throat.

Until tonight, soothing was my least favorite kind of magic, but being attacked by a galvanic mage sucked too. The bastard shot me with a bolt of electricity. My muscles still hummed and twitched, and I didn’t even want to look at my hair.

As the police searched my house, I brooded at my kitchen table. Why me? Why did I always end up in the crosshairs of some maniac magic user? Of course, the answer to that was easy. It was in my DNA. Koro would never stop coming for me.

The officer who took my statement suggested I interrupted the burglar before he could steal anything. He told me to get a copy of his report from the precinct and to go through all my belongings carefully for the insurance. I once again refused his offer to call the paramedics. As far as the police were concerned, I’d only been knocked down. No way to explain the burn mark on my wall, or the bruise blossoming on my chest, so I ignored those.

“Is there anyone you can call?” the officer asked, after they helped me board up the broken window. “We’ll have a car in the area tonight, but you shouldn’t be alone.”

I nodded. As soon as they left, I dialed Henry’s number. It went straight to voicemail. Damn. I forgot he went on some secret Paragon mission.

Since Koro’s attack last fall, Henry Garza had been teaching me defense, both physical and magical, with varying degrees of success. A kick-boxing instructor for mundanes by day, Henry was also a Knight of Paragon, the group of warriors, healers and scholars who protected the mundane world from all things supernatural. My adopted father, Emmett, put me in touch with him when my nightmares of Koro and William Fain became a risk to my health.

It turned out that kicking the crap out of things helped. Blowing stuff up with balls of magic fire was also cathartic, even if my spells tended to get away from me. But I improved with every lesson. I’d only set the dojo on fire once last week.

Henry taught me to ward my house and my body. When he learned of this attack, he’d offer praise and disapproval. Praise for calling up the ward under duress, and disapproval for letting it drop after the first attack. I’d take the criticism if it meant I didn’t have to spend the rest of this night alone. But Henry was away, and I had no one else to call.

That wasn’t entirely true. Every day for the past five months, I wanted to call Quinn. Even now, my finger hovered over my phone. He would come. I knew he would, but I hadn’t called him when things were good, and it seemed unfair to reach out now. Quinn wasn’t my protector. I had no right to ask him to save me. I sighed and put the phone down.

Unable to sleep, I spent the dark hours of pre-dawn sorting through my jewelry and other precious effects, even though I knew all would be in order. Whatever the intruder sought, it wasn’t mundane valuables. Other than a broken lamp in my bedroom, I couldn’t find anything missing or damaged. The police had poked their heads into my attic, but found only boxes of books still unpacked from my last move.

Nothing out of place. Nothing missing.

I went to bed and managed only two hours of sleep before my traitorous alarm woke me.

In the harsh morning light, the burn mark in my foyer looked even worse, and my chest ached. I left another message for Henry before heading to work. I owned a small fiber shop on Main Street in Ashlet. Mondays at the

Woolery were quiet, and I hoped to use the time to practice that warding spell. I needed to learn to keep it intact even while under fire from an enemy. If the intruder had better aim, he would have killed me.

So preoccupied with my thoughts, I didn’t notice the buzzing sound in my ears until I unlocked the store.

I stood in the open doorway with shock locking my legs in place.

The store was a mess. Baskets of wool were pulled from the shelves and left in heaps on the floor. The book and magazine section was torn apart. Chairs were toppled in the lounge and my cash register lay open and empty on the floor beside the counter.

I stared at the ransacked chaos and suddenly recognized the buzzing noise I’d been hearing all along. It was an aether signature—the same one I’d detected in my house last night.

I picked up my phone to call the police again, but I needed more than mundane help this time.